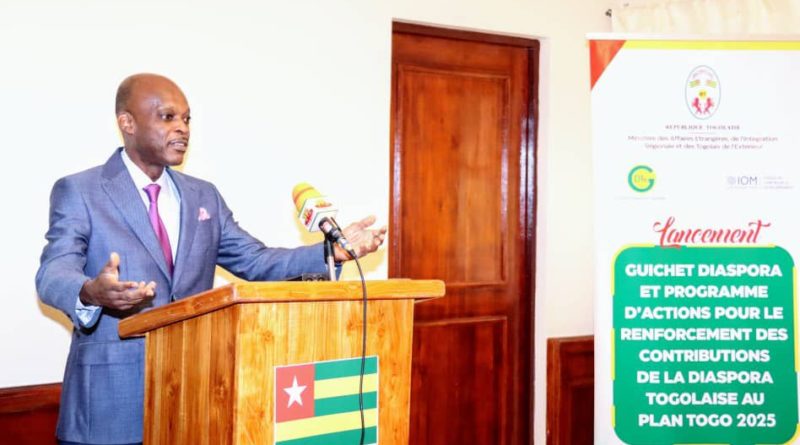 A “Diaspora House” was inaugurated Thursday in Lomé by the Togolese Minister for Foreign Affairs, African Integration and Togolese Abroad, Prof Robert Dussey. The building will serve as the headquarters of the High Council of Togolese Abroad (HCTE) and the Diaspora Window. These 2 institutions were set up to optimize the contributions of Togolese abroad to national development.

“The inauguration of the House of the Diaspora is in line with the many actions initiated by the Government in accordance with the vision of the Head of State, HE Mr. Faure Essozimna Gnassingbé to include and involve all Togolese in the work of nation-building, ”said Professor Robert Dussey at the inauguration.

According to the Togolese head of diplomacy, the “House of the Diaspora” reflects the culmination of an ambitious process that began with the creation of the Directorate of Togolese Abroad (2005) and with the national meeting of the diaspora ( 2014). Prof Dussey explains that “the House of the Diaspora is the privileged place to welcome the diaspora, to respond to their concerns (assistance to meet the needs) and to build projects leading to growth and development”. All for the well-being of the Togolese population and with the support of the HCTE Country Delegates.

Kodzovi Atitso, the President of the HCTE and Safiou Radji, the Coordinator of the Diaspora Window expressed, on behalf of the Togolese diaspora, their thanks for the strong and significant acts of the Government.

For them, these acts testify to his desire to work with the diaspora and the encouragement to get more involved in the effort to build the collective prosperity of Togo.

The ceremony was the occasion for MM. Atitso and Radji to remind the diaspora of its essential role in national development. In the same vein, they are that the creation of the House of the Diaspora is a strong signal sent to the diaspora on the eve of the census of Togolese Abroad.

Note that partners including the International Organization for Migration (IOM), the African Development Bank (ADB), the United Nations Development Program (UNDP) and the European Union (EU), etc. foreign affairs in its initiatives in favor of the Togolese diaspora.