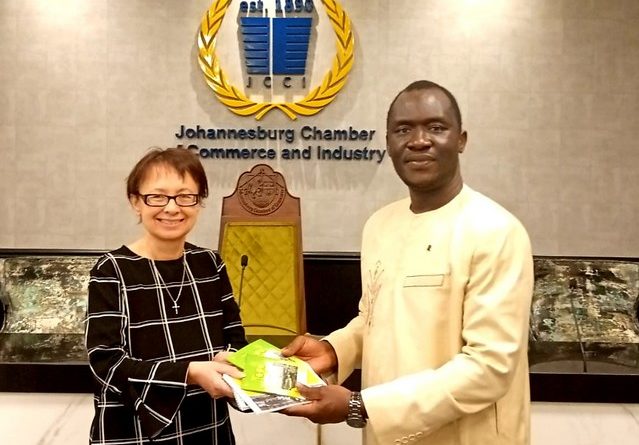 On 05 November 2021, Mr. John D. FINTAKPA LAMEGA, the Chargé d’Affaires of the Republic of Togo had a working meeting with Madam Bernadette Zeiler, CEO & Head of International Trade of the Johannesburg Chamber of Commerce and Industry (JCCI).

The meeting began with a site visit of the JCCI, an independent, non-political, subscription-based association dedicated to promoting a business-friendly environment which was founded 131 years ago and plays a key role in the promotion and facilitation of international trade.

Upon mutual introduction, Mr. FINTAKPA LAMEGA expressed a keen interest in strengthening the existing ties between South Africa & Togo and requested the assistance of the Chamber in order to connect with potential investors based in South Africa. He gave an overview of the investment opportunities in Togo. He indicated among other things, that Togo has a free economic zone, a deep-water port, a renovated airport. He also pointed out that Togo is a member of sub regional entities such as the West African Economic and Monetary Union (WAEMU/UEMOA) and the Economic Community of West African States (ECOWAS). He mentioned that Togo has a favorable business environment and tax facilities. Furthermore, he emphasized that accessing the Togolese market opens a gateway to the Sahel region such as Mali, Burkina Faso, Niger. 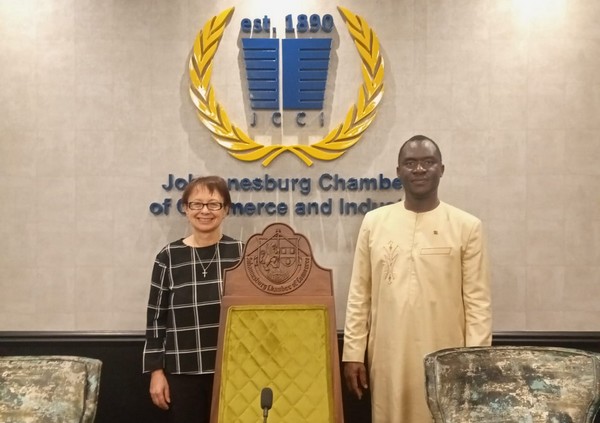 Afterwards, Madam Zeiler took the floor and said that the JCCI is a link between Governments and businesses and is part of the International Chamber of Commerce as well as the major chamber in South Africa including the Cape town Chamber, Durban Chamber, Pietermaresburg Chamber, Port Elizabeth Chamber, East London Chamber and Middleburg Chamber. She added that most activities have been ongoing online due to the COVID-19 pandemic however they are going to resume face to face activities from next year.

She spoke about a trade day event, a very beneficial platform, which is organized by the Chamber to present countries investment and trade opportunities to its members and enable them to network with various partners. She emphasized that the Trade days are cost-effective and they have had great success with it in the past.

Lastly, she pointed out that the Chambers of commerce of the two countries could sign a Memorandum of Understanding in order to mutually promote trade and commerce opportunities.

Finally, the Chargé d’Affaires showed his appreciation to Madam Zeiler for taking time to meet with him and expressed his hope for a fruitful cooperation in the near future.

The meeting ended with a hand over of pamphlet and CD on investment opportunities in Togo.