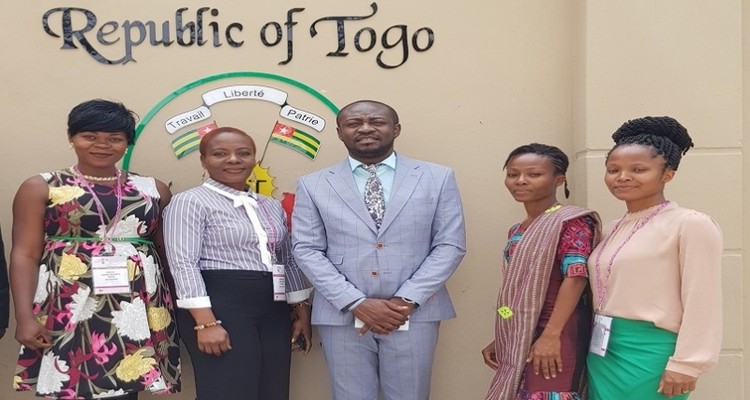 The Chargé d’affaires of Togo in South Africa, Mr. Kokoutse Gouna traveled this Wednesday, November 6, to “Birchwood Hotel and OR Tambo Conference Center” in Johannesburg where the African Women in Dialogue (AFWID) forum is taking place. Objective, meet the women who represent Togo at this great continental meeting to support and encourage them. In turn, part of the Togolese delegation went to the Embassy of Togo in Pretoria on Thursday November 7 to say thank you to the Togolese diplomat.

During his visit, the Chargé d’affaires welcomed Togo’s strong participation in this forum and welcomed the commitment of the Togolese woman who, according to him, has finally found its way. “It is a great joy to see our women in South Africa. It is not every day that we receive a delegation of women. So it’s already a very nice surprise for us and above all we are happy to see that the woman has finally found her way. I also believe it is an honor to be here and support them. I wish them all the happiness so that they always carry Togo higher, “said Mr. Kokoutse Gouna.

For Mr. Gouna, women should no longer be reduced to household activities. “Our sisters must be inspired by this event so that the woman can go even further. Women have their place in society. And for the development of our country, it must contribute to it, ”he insists.

The diplomat also invited women to contribute, to calm the climate during this electoral period in Togo. He remembers that in the days when the men left scarcely, the women went on sex strike and calm returned. “Women have the ability to invite men to the table for discussion, dialogue and soothing the climate. “, He said.

In Pretoria, Thursday, November 7, the women’s delegation for its part, said it was delighted with the consideration of the diplomat vis-à-vis his compatriots. “We are very touched by your gesture. You have honored us before an entire continent. You have shown us that you are very sensitive to the feminine cause and that marked us very much, ”says AFWID national coordinator, Ms. Toffa Kékéli, entrepreneur.

It should be emphasized, the diplomat took the opportunity to exchange with these women on his mission and activities as a representative of Togo in South Africa. He also mentioned the creation of the Embassy which dates back 4 years. Reflections have also revolved around possible cultural projects that the Embassy of Togo in South Africa could organize in order to give more visibility to Togolese products in the country of Madiba.

As a reminder, 15 Togolese women participate in the Forum African Women in Dialogue which takes place from 4 to 8 November in Johannesrbourg. Organized by the Zanele Mbeki Development Trust, AFWID aims to be an inclusive dialogue platform intended to bring together African women from all walks of life under the same roof so that they can debate issues of continental importance and female leadership.